A Foundation Trust was in the bottom quartile in the country for patient satisfaction measured by the Net Promoter Score. The decline had lasted over three years and was getting worse.

A set of patient derived values was built through a series workshops with motivated patients and their cares over a period of 2-3 months. From this a set of clearly articulates values and behaviours were established and communicated. Nominations from patients, carers and staff were invited for quarterly award to recognise those actions and behaviour were exemplary. The local newspaper became the media sponsor.

Patient satisfaction moved from the bottom quarter to the median, ahead of the average scores in the Strategic Health Authority within one year 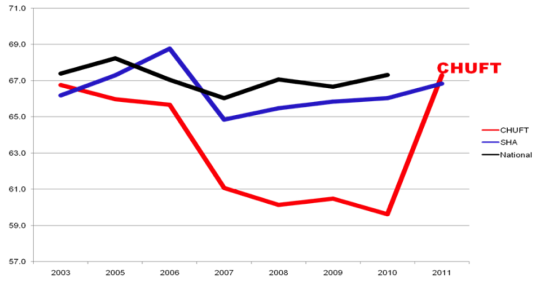